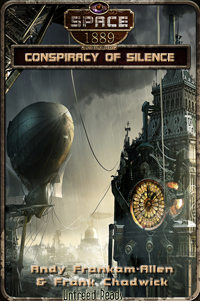 I'm just back from Fredericksburg, VA and the HMGS Historicon show where we had some great fun with Mars Needs Steam -- and more about that soon. But also waiting for me when I returned was the final cover for Conspiracy of Silence as well as the promotional blurb. This is the seventh e-novel from Untreed Reads in the Space 1889 and Beyond series, or the first one in the second series, depending on how you look at it. Andy Frankham-Allen, the series editor, and I co-authored it. Of course, the very first thing which should jump out at you is that our new cover artist is shit-hot. This is a low-res version of the cover, but I'm sure I'll have a better one when it actually launches, which should be within days.

Here is the promotional description:

For Nathanial Stone and Annabelle Somerset, the most harrowing journey has only just begun!

At long last, Nathanial and Annabelle are back on Earth, but the reception is hardly what they hoped for – Nathanial locked up in Chatham Convict Prison, Annabelle and her uncle Cyrus Grant held in the Tower of London: the charge – treason!

Someone high up in the British government is putting pressure on them for mysterious reasons. But when the Austro-Hungarian ambassador to is assassinated in a gunpowder plot which would have made Guy Fawkes smile, events spin out of everyone’s control.


The clock is ticking down on the arrival of the new Austrian ambassador, and on an assassination plot which aims to cut the heart out of the British monarchy and government. The race to thwart the conspirators will take Nathanial, Annabelle and George Bedford through the heart of Whitechapel at night, to gunpowder barges anchored in the , to seedy boarding houses attacked by infernal clockwork devices and finally to the dizzy heights of a zeppelin docking gantry packed with explosives, and where a single spark will mean extinction for all.