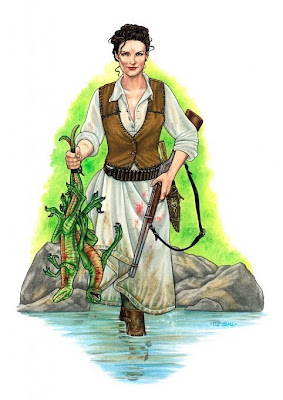 I've posted several pieces of art from the German (and soon to be English language)  Space: 1889 basic book before, including character archetypes. Those were done by Mia Steingraeber and have been big hits with about everyone who's seem them. The above one is not from the main book, but instead is a sample archetype from the forthcoming Venus sourcebook. Here's a link to the HeroPress site giving a little more info about the new Space: 1889 art, as well as al update on the Kickstarter project.

Okay, I suppose it's a bit presumptuous to think I am your favorite author, but hope springs eternal. 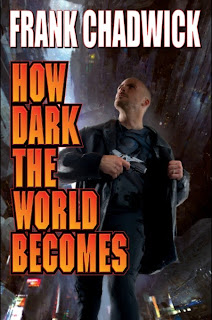 The interviews were occasioned by the publication of How Dark The World Becomes earlier this year. They were conducted by email a couple weeks ago by Keith Brooke, well-known British science fiction author, editor, and web publisher.  The first interview (link) is in SF Signal online, which I'm sure many of you know of. The second (link) is a follow-up interview which appears in Keith's own Infinity Plus e-zine. I like the result because Keith got me to talk about some things I've never said much about publically, including the "type" of books I like to write. Take a look.
Posted by Frank Chadwick at 5:01 PM 1 comment:

Congratulations to Patric Götz of Clockwork Productions, Angus Abranson of Chronicle City, and everyone else who has worked on the new Space 1889 project. It went live on Kickstarter at 6PM on Wednesday night and by Sunday morning had met its funding goal. As I write this on Sunday evening it is at 111%. Once it gets to 120%, the first stretch goal--the 32-page adventure "The Order of the Invisible Eye" by John Wick--will unlock, with more to follow that.  This is terrific news for the game and thanks to all of you who joined in to help put it over the top.

When I posted about Clockwork Productions' kickstarter two days ago, I failed to give a link to the site. Not a big deal, really, as it's the only Space 1889 project on kickstarter, and you are all reasonably resourceful adults. That said, here's the link. Check it out.
Somkeone told me today that if the project hasn't made 20% of its goal in the first ten days it probably won't make it. Well, this one has hit 90% of its goal in the first three days, so I'd say there's a pretty good chance it's going to do okay in the remaining thirty-seven. Get ready for a boffo new English edition of the rules.

In the mean time, here's a look at the sculpts for their Martian Princess figure,  one of the premiums they're doing. 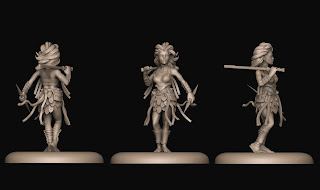 Posted by Frank Chadwick at 1:32 AM 6 comments:

I'm way behind on news and views, and so you'll see several posts next week, after I return from Historicon in historic Fredericksburg, VA. But there's one piece of news which could not wait, Stop The Presses kind of news. Clockwork Productions brought us the beautifully-produced German edition of Space: 1889, and everyone wanted to know, "When will there be an English edition?" Your entreaties have been answered. The Space: 1889 Kickstarter crowd funding starts this evening, Wednesday, July 17th. I'll let them explain in detail. Here is their press release. Go take a look. I think you'll like what you see.

Cologne & Swindon, July 2013
Wednesday July 17th sees the launch of a new Kickstarter by Clockwork Publishing and Chronicle City to fund the new English version of the award-winning RPG Space: 1889.

“The year is 1889 and Mankind has conquered the inner planets of the Solar System and now travels through the Ether between worlds. We discovered the ancient culture of the Martians and the misty wilderness of Venus. Mercury is a world of extremes, but rich in valuable raw materials. The Asteroid Belt and the Earth’s moon, Luna, are still waiting for further exploration. And there is still a lot to discover on Earth itself.

Under the burning sun of the Martian steppes, the steamy mists of the Venusian jungle, the deadly cold of the Dry Ice Zone on Mercury, or at the banks of the Amazon River on good old Earth – the world of Space: 1889 is full of adventures.” 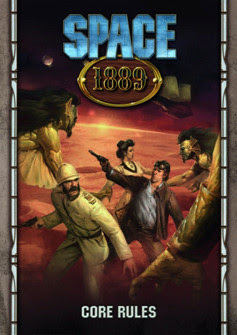 Almost 25 years ago, well known game designer and author Frank Chadwick came up with the idea of a roleplaying game set in a world inspired by the fantastic novels of early Science Fiction authors like Jules Verne or H. G. Wells.


Space: 1889 was first published in 1988 by Game Designers Workshop, followed by several additional products, amongst them supplements like “Ironclads and Ether flyers,” adventures like “Canalpriests of Mars,” and board games like “Temple of the Beastmen.”


GDW is long gone but, nevertheless, the fan-base has hung on to this “roleplaying game in a more civilized time” and with the growing popularity of 'steampunk culture' the time has never been better to reintroduce a new edition of the game for old and new fans alike.


The Space: 1889 Crowdfunding project is a cooperation between Uhrwerk Verlag/Clockwork Publishing, Chronicle City, and the master himself, Frank Chadwick.


Already released in German in 2012, the new version features new rules, new artwork, and extended background information that hadn't been available before. Working closely with Space: 1889 creator, Frank Chadwick, a completely new rulebook has been produced, not only building on the original version from the 1980s and 1990s but expanding it in accordance with what has been produced before.


The new version of Space: 1889 uses the fast and easy to learn Ubiquity-ruleset from Exile Games Studios, an award winning system invented by Jeff Combos and used by the RPG Hollow Earth Expedition.


With this new Kickstarter project we hope to expand the exciting new Space: 1889 RPG to where it has its roots: the English-speaking world. We are hoping the core rulebook will be the start of a whole range of Space: 1889 products in English. With each reached stretchgoal, we will be adding new adventures, sourcebooks, accessories or other items.


Come and join us on an exciting voyage through the solar system and visit the deserts of Mars, the dense jungles of Venus or the icy cold of the dark side of Mercury. 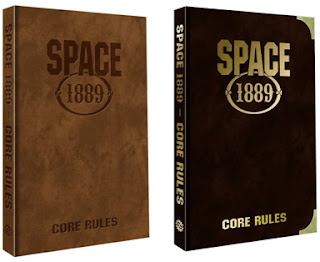 About Clockwork Publishing
Clockwork Publishing (or to be more precise: Uhrwerk Verlag, which is the german name, but quite unpronouncable to our english customer base) has been publishing RPGs since 2009, including the German versions of Hollow Earth Expedition, Deadlands: Classic and The One Ring, as well as a lot of RPGs of german origin like Dungeonslayers and Das Schwarze Auge – Myranor. Patric Götz, the owner of Clockwork Publishing, is working in the RPG industry for over 15 years and still hasn't managed to find a decent job somewhere else.
About Chronicle City
Chronicle City is a British based games company set up by multi-award winning publisher Angus Abranson (ex-Cubicle 7 Entertainment; Leisure Games). Chronicle City works with a number of companies and designers, helping to publish and distribute their games. In addition they also develop and license settings to create there own roleplaying, card and board games. Angus has long been a fan and supporter of the steampunk genre, and still has the character sheet of his first Space: 1889 character from when the game was first released!
---------------
For more information on Space: 1889, the Kickstarter the companies involved, or to arrange interviews or previews of the game and the creators behind it, please contact us on info@chroniclecity.com