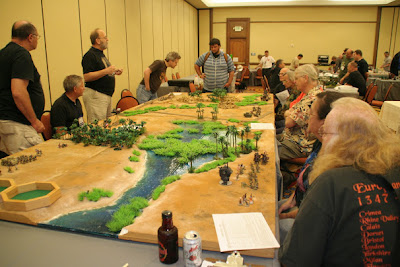 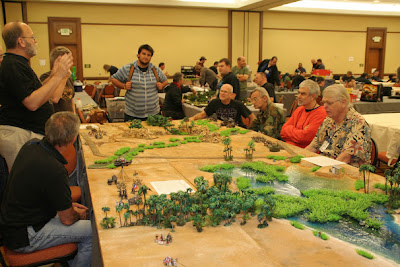 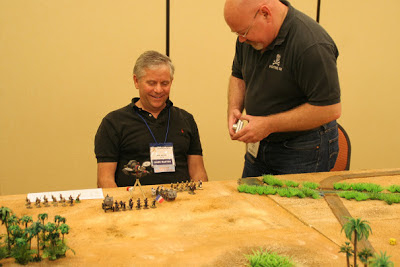 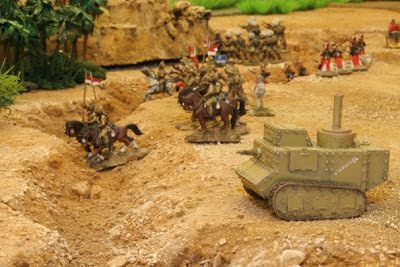 Visions of Futures Past 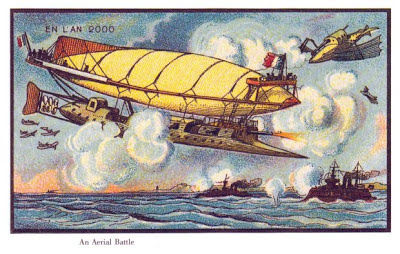 Beginning in 1899 the French issued a series of postcards (no, not the naughty ones!) which featured impressions by artist Jean-Marc Cole and others of what life in France would look like in the year 2000 (En L'An 2000): transportation, industry, liesure, and war. 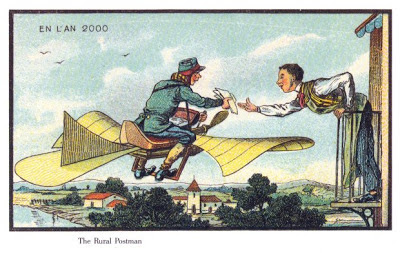 What is striking to me about this collection of images is how prominently flight figures in their view of the future. Most of the images feature people or machines in flight: winged firemen pouring water on a fire in the uppers story of a building, winged policemen chasing a thief fleeing in a flying machine, winged duck hunters rising up to shoot their prey, winged tennis players enjoying "air tennis." Flight would become as everyday an event as walking or taking a bicycle ride, they thought, and the abundance of personalized flying machines in the collection makes it clear this fascination with flight was deeply personal, not simply dispassionate technological projection. We have always longed to soar among the birds -- still do, although now our imaginations have been tamed by the thoroughly unromantic realites of cost, safety, and the inherent engineering difficulties of personalized flight. That does not keep us from sky diving, though, does it? 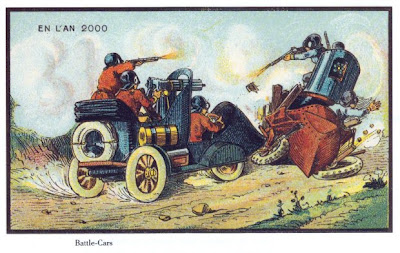 Conflict also figures in these images. There is no belief that war would be a thing of the past by 2000, a distant memory of more barbaric times. Instead it would be waged by men and machines which sometimes bear a striking resemblance to the contrivances of the 1920s and 1930s. It's hard to see a century ahead, but perhaps not so hard to see three or four decades.

These images were originally presented at the World Exhibition in Paris in 1900 and additions to the collection were made over the course of the next ten years. Almost 90 images were created and distributed. Here is a link to a collection of 47 of them. It's well worth a look.
Posted by Frank Chadwick at 9:50 AM 1 comment: 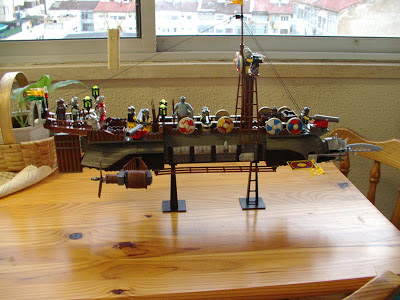 A Martian screw galley built from . . . Legos? Yes friends, that's right. This beautiful Martian cloudship, perhaps based on a Hullcutter design, was built by the talented Ingo Siekmann. I really like this!

Here is a link to a whole gallery of pictures of this wonderful toy ship.

I misunderstood the original posting. Ingo Siekmann did not build the ship, he found the website with it and re-posted it. He sent me the following:

"Mr. Chadwick, there seems to be a misunderstanding. I did not build this model, I just stumbled upon the picture in another blog. The ship - and many other models - were build by a Portugese hobbyist
called Paulo Castanho, who mantains a great gallery." 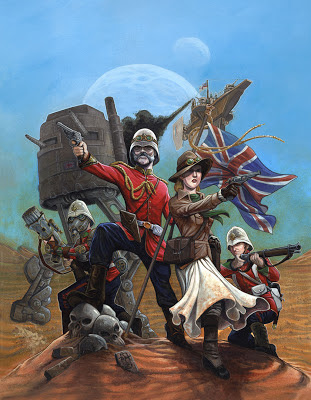 I'm very happy with how the game plays now, after dozens of playings with who knows how many players -- most of them first-timers. The rewrite I'm working on is just to smooth out any remaining rule ambiguities and add a few more exotic weapons to the design system.
Posted by Frank Chadwick at 11:08 AM 10 comments: