Finally! A really useful Steampunk contraption. In fact, I wouldn;t half mind having one of these myself. Here is a link to the Youtube video of a steampunk corkscrew and wine pourer. Very fun.
http://www.youtube.com/watch?v=wSuH9u0kvhU
Posted by Frank Chadwick at 5:07 PM 1 comment:

Email ThisBlogThis!Share to TwitterShare to FacebookShare to Pinterest
Labels: Steampunk 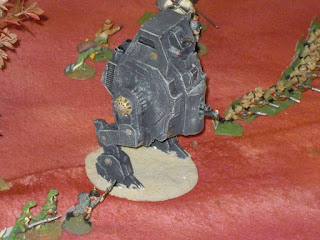 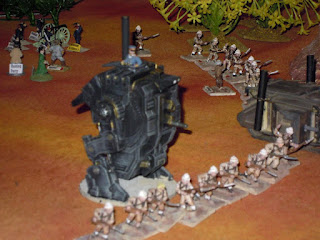 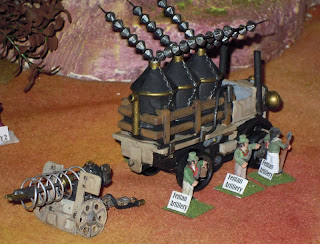 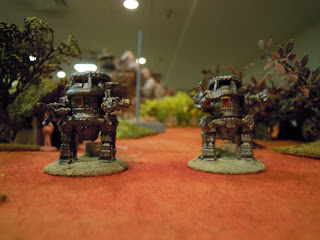 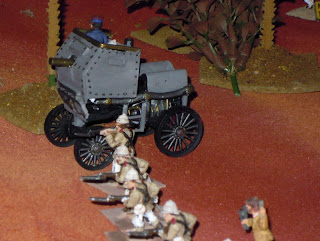 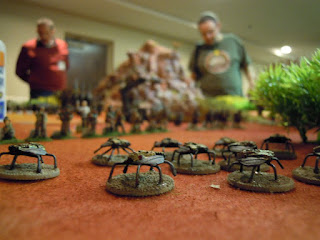 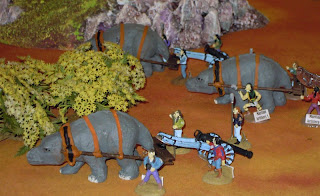 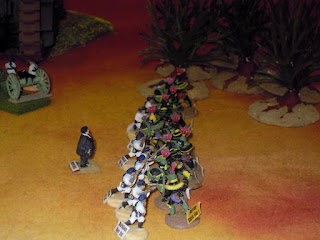 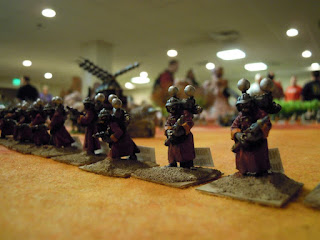 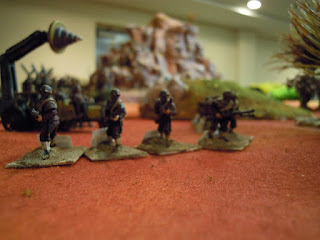 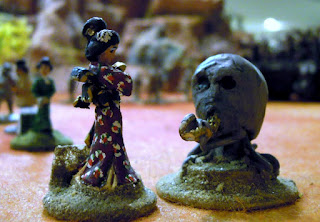 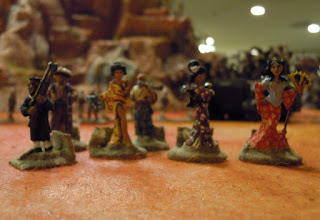 Last but by no means least, here's the Japanese hunting party. It's perhaps a little heavy on geishas. Oh well.
Posted by Frank Chadwick at 10:37 AM 11 comments:

These are some of the vehicles and units Tom Harris and I put together for Mars Needs Steam at Cold Wars. the game did not come off due to some logistical glitches, but Tom did some photos anyway, which is a switch -- how many times have we had a game but no useable photos? Now we have photos but no game.

This first guy is a lightning cannon towed by a twin-boiler steam lorry with generator. The gun started life as a Paroom Station smoke launcher but I added the long central barrel and the coil to give it a more electircal look. The generator truck was fron another steampunk movie. I added smokestacks to the front and turned the three tanks of liquid to generators by adding those big insulated things on top. I think it ended up a nice combination piece. It's currently manned by Fenian gunners but I have a Paroom Station gun crew of smoke stalkers in preparation to provide the permanent crew.

Here is a new German combat walker supporting some Venusian schutztruppen with an aerial steam launch in the background. Tom Harris did this walker using the same original model I used for the Belgian walker I showed a couple weeks back but did a lot more work on it -- basically disassembling it and reassembling it into a completely different vehicle. The legs are the same, of course.

More models from Paroom Station, these are Japanese mechanical walking suits. I thought about using them as boiller suits, but they're just a big big for that so we're using them as very small armored walkers. I am still "interviewing" several white metal models to see which I will cast in the role of boiler suits, although I think I'm pretty close to having an answer.

Fell beasties play a part in the game as well. On the right is a Knoe Shoshu, usually found lurking near swamps and canals. Tom Harris modeled that himself. On the left is its intended victim, a geisha from a Japanese hunting party, also painted by Tom. A hunting party has three hunters with hunting rifles and two "attendants" with revolvers. That lets you get creative with the figures. European aristocratic parties, of course, often include a butler as an attendant, and a geisha for the Japanese was a no-brainer.

I'll post more pictures as we have them. Our next big game will be at Little Wars in the Chicago area, April 27-29.
Posted by Frank Chadwick at 5:20 PM 3 comments:

Back From The Road

I'm back at the keyboard after a long absence. I attended the Cold Wars game show in Lancaster PA on the 9th through the 11th and then stayed over and attended The Write Stuff writers' conference in Allentown PA on the 16th and 17th. 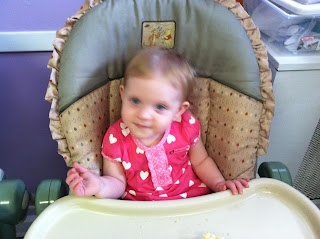 I got to hang out with my goddaughter Diana for a few days in between -- she's 13 months now and a real pistol. She's got about a dozen words and came up with a new phrase while I was there. She waved and said "night-night!" to me one night, the first time she's ever said that. She has one other phrase she's fond of as well: "oh-shit!"

Just look at those eyes, would ya? Those of you who have picked up A Prince of Mars may have noticed it's dedicated to her, "when she's old enough to read it." Maybe not as long as I thought.

The Write Stuff is sponsored by my old writers' group, the Greater Lehigh Valley Writers' Group (GLVWG, pronounced Gliv-Wig), and it's probably the best small writer's conference out there. They cap the attendance at 150 (because of the venue) but always manage to get great presenters. James Scott Bell was the featured guest this year, did a two-day workshop before the show, several presentations during it, and the keynote address. Bell's been a hero of mine for a long time. He's not just a fine writer, he's written probably the most practical and useful book on writing I've ever read: Plot and Structure, published by Writer's Digest Books. If you are interested in writing, buy this book. Buy it now.

His workshop was loaded with terrific material as well, and I'll share just one bit which was actually almost an aside, and wasn't part of his main syllabus, but is worth repeating. It has to do with elevator pitches. For those of you who aren't professional writers, or aspiring professional writers, the "elevator pitch" is designed for those moments at a writer's conference (and they are way more common than you would think) when you get in an elevator, the doors slide shut, the person standing next to you notices your badge and says, "I'm a literary agent (or acquisitions editor). I see you're attending the conference too. What are you working on?" You now have less than a minute to "pitch" your book. Tou have to say everything necessary not only to explain what the book is about, but also hook the interest of someone who has already heard probably twenty pitches so far that day. If you start with, "Well, it's complicated. . ." hang it up. Either you know exactly what's coming out of your mouth or you don't.

So what Bell gave us was his take on the classic elevator pitch. He argues the pitch consists of three sentences. The first one gives the character's name, occupation, and everything you need to know about their background. "Dorothy is a young girl in rural Kansas, unsatisfied with the dull world in which she lives." The second sentence begins with the word "When," and establishes the inciting event which catapults the character into the main part of the story. "When a tornado picks her up and lands her in Oz, she finds herself the target of a Wicked Witch." The third sentence starts with the word "Now" and explains the main object and conflict in the novel. "Now, with the help of three unlikely companions, she must make her way to the Emerald City so the Wizard can show her the way home."

Why, aside from helping you sell your book, is this so important? Because it also helps you understand your story. One of the guys at the conference later told me he couldn't really fit his story into these three sentences, and that told him he had a story problem. He did not have a clear enough inciting event and he really didn't know what the main objective of his protagonist was. He'd had the feeling something was wrong with the story for some time; now he knew what it was and how to fix it.

Also later in the conference I had a meeting with an agent interested in steampunk fiction. My own The Forever Engine is currently in at Baen Books under option, although I havn't heard yet whether they are going to pick it up. I told her that and that it might not be available but she wanted to hear about it anyway. (Already having another book under contract doesn't hurt.) So here's what I told her:

"Nick Fargo is an historian at the University of Chicago and an Army veteran of Afghanistan, When he is called to England to help investigate an odd cultural resource find at a high energy particle accelerator facility, a catastrophic accident hurls him back in time and into a parallel Victorian world, where there are flying ironclads and interplanetary travel is a reality. Now, joining forces with the British military and a beautiful French spy, he must track down a murderous rogue scientist who may hold the key to his return to his own time and place."

There are two lessons in this.

First, you have to have a clear and very simple understanding of your protagonist and his or her story in order to engage the interest of readers. (In this case, the agent represents all readers, because she is looking for things which her experience tells her will interest a large number of readers.)

Second, at every step of her follow-on questions, she liked what she heard because it was not what she expected. There are tens of thousands of stories appearing in print and as ebooks each year. The object for a writer is not to fit in, it is to stand out. Readers are not interested in reading the same things they have already read, but rather something different, surprising, even shocking. If you want to tell stories,
those are the stories worth telling.

For those of you interested (and strategically located) Bell is doing a number of multi-day workshops across the country this year. Check him out at this link and then click on the "The Seminar" button.
Posted by Frank Chadwick at 12:22 PM No comments: 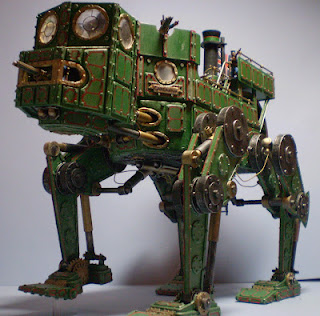 I recently discovered this Steampunk modeler and bloger's work and thought I'd share it with you. Colonel O'Truth's Miniature Issues is the blog of a New Zealand hobbyist who recently complete the above model, adding it to an already impressive collection of beautifully-rendered Victorian science fiction gizmos. Here is a link to the specific blog entry describing the above monster, along with lots of detail close-up photos. It has over 3,000 individually-mounted rivets! Madness! But a fine madness indeed.

I've added his blog as permanent addition to the links. Lots of fun stuff here.
Posted by Frank Chadwick at 10:36 AM 7 comments: