I mentioned a while back my sojourn to as GOH at Consim World Expo 2011. I had a great time (as always) and came back with lots of jobs to keep me busy for the foreseeable future (once A Prince of Mars is finished, of course.) Most of the show deals with historical board games, and one of the big pluses for me is to get a chance to see and hang out with the crew from Victory Point Games. They publish a number of historical board games, including a growing number from yours truly, but their line is incredibly broad.
Which brings me to today’s subject – Nemo’s War. This is a remarkable little game from Victory Point Games which should delight Steampunkers everywhere, and I enthusiastically recommend that you at least take a look at it. It is designed by Chris Taylor, a veteran computer and board game designer with some real chops. It is a solitaire game in which you play Captain Nemo against – well, against the world, pretty much, or at least against its colonial powers. It captures the feel of the novel spot-on, has a strong narrative feel as the story unfolds, and remains a very easy-playing but challenging game.
Here is a link to the VPG page covering the game.  Lots of stuff to see here, including the rules and design notes.
Here are some comments from players and reviews. Full disclosure – I had nothing to do with the design and I receive no royalty on this game; I just think it's cool.
- "One of the best games of 2009, and Nemo is a must-own for the solo gamer in my mind." - Michael Debije (Board Game Geek)
- "It stands as a shining example of how games can express theme, narrative, and setting without a hundred dollars worth of cheap bubblegum machine figures, gaudy artwork, or laughable flavor text." - Michael Barnes (Game Shark)
- "Very original and narratively rich, it lets you choose your own way, and even change it mid-game. Multiple goals, multiple end-of-game conditions, this is a swiss-knife of a game!" - Stephane Josephy (Board Game Geek)
- "At the end of the day I would say Nemo’s War ranks up there as a penultimate example of solitaire gaming done right!" - Jeff McAleer (The Gaming Gang)
- "What makes the game for me is that I can see and feel the passion that the creator put into the game. I see that this is a labour of love." - Paul Shabatowski (Board Game Geek)
- "I found Nemo's War to be a very light but short and enjoyable solitaire game with elegant rules but a surprising amount of control over how you play the game." - Dug (A Boy Named Dug)
- "The game was fun to play and difficult to beat. Great theme and nice execution. Certainly not a brain burner. I would recommend Nemo's war anyone who likes a fun fast solitaire game that is well executed." - Kenneth Lury (Board Game Geek)
- Easy to set-up and learn (at least in terms of how to play). The mechanisms for variety from game to game are simple yet clever, giving it a high replay value. The mechanisms for forcing many different decisions are outstanding. This is one of, perhaps the best, true solitaire game I've encountered." - Jim Bailey (Consim World)
- "I can see how the different objectives will make you re-think your strategy and try different paths to victory, which is cool. I'm playing this again for sure, as I found it to be much less complex than I expected and also very fast to play." - Jorge Arroyo (Board Game Geek)
- "Nemo is, simply, a joy to play. You begin pushing cardboard chits around a piece of paper but are soon engaged in a highly involved game of strategy and resource management. Fulfilling those victory conditions and reaching the highest point value (the more victory points, the better the result) is a terrific and enjoyable challenge." - Howard Jones (Black Gate Magazine) 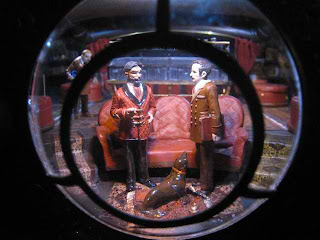 To get you in the mood to play, here is a link to a page with gobs and gobs of amazing photos of various scale models, including interiors (as above -- which is just a detail on the completed model), of the Nautilus. Really, check this out.
Posted by Frank Chadwick at 11:23 AM