As I mentioned a few days ago, I ran Mars Needs Steam at the Fall-In convention in Lancaster, PA over the Halloween weekend. It was not a scheduled game, but there was a cancellation the first night of a different game, and I had some figures and vehicles along, so ran a pick-up game. 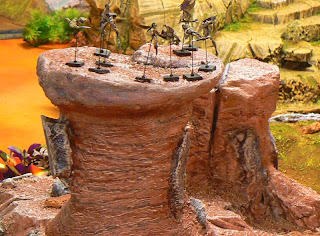 I said before that the game benefitted from some very nice terrain my friend Glenn Kidd put together -- very nice and of genuinely epic scale! This Martian mesa is topped by almost a dozen High Martians. To give you an idea of size, those are 25mm minitures up there.

A unit of British prepare to advance, supported by an armed aerothopter.You've seen my aerothopter before but this is a different angle. For those of you exclusively into gaming, and who have never bumped up against the wider world of steampunk culture/fandom/whatever, one thing which the devotees have as a shared interest is actual physical craftsmanship and tinkering -- modification of costumes, props, accessories, you name it. That's actually a point of convergence with steampunk miniature gaming as well. There are some great figures and vehicles available commercially, and I've reviewed a few here in this column myself. But almost everyone I know who runs steampunk games takes particular pride in the vehicles and figures they have converted, and I'm no exception. Love that aerothopter!

You've seen our Venusian Schutztruppen before as well, but here's a nice closeup of the unit. 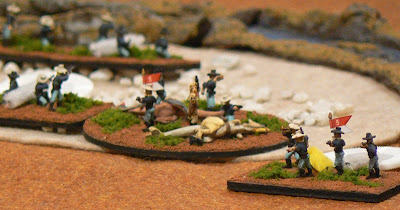 I wasn't the only one running steampunk games there. This is a detail from a the U.S. 5th Cavalry on Mars game run by Highlander Studio's Rod Campbell. This is fairly late in the action, as the cavalry have shot their gashants and are taking cover behind them.

This shot is from earlier in the action. Those are some very brave or very stupid Hill Martians. 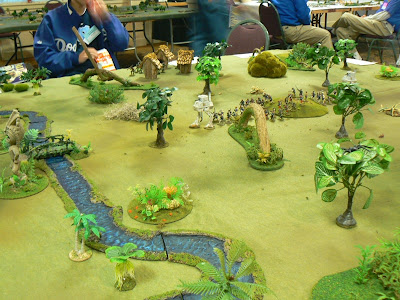 Someone else ran a Space: 1889 miniatures game set on Mars using the Gaslight rules. I like the clean look of the terrain and there were a number of nice detail pieces that made this especially good-looking. Those are very nice Victorian SF combat walkers, converted from some Games Workshop pieces. 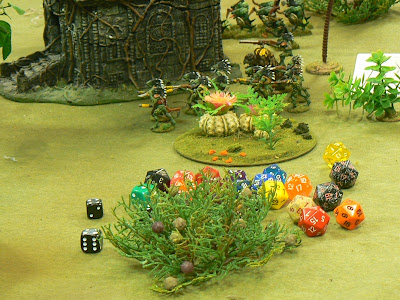 The RAFM fantasy lizards we use for Venusian lizardmen are long out of production, but this guy has converted some Games Workshop lizard warriors to Venusians, and I think they look great.

While I was there I picked up a bunch of figures from Bob Charrette at Parroom Station -- lots of sinister minions and a couple great anarchists, complete with floppy hats, long cloaks, and round black bombs. This stuff really is too much fun.
Posted by Frank Chadwick at 11:31 PM