Last week I attended Historicon in Valley Forge, PA. Rod Campbell of Highlander Studios was unable to attend due to illness in the family, but he sent me some master figures for approval and just sent pictures of some painted miniatures. I like them a lot, and I'm used to looking at 25mm figures instead of 15s. See what you think. 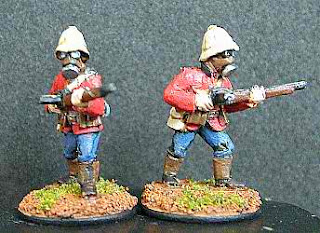 Here are some British infantry in gas masks and carrying advanced magazine rifles. Rod plans to do these both with and without gas masks. These first ones give a good feeling for proportion and level of detail. 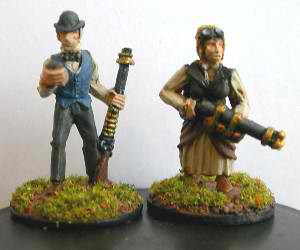 Here are two adventurers kitted out for wilderness exploration and also packing some interesting weaponry. Nice faces, especially for 15s. 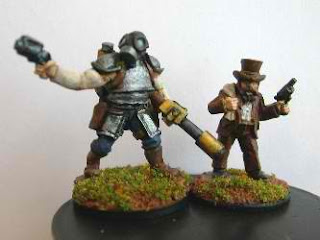 These are from the American Adventurers pack, although I suppose they would work just as well for anyone who likes body armor or bags of cash. (I'm guessing that's what's in the bag in any event -- those American arms dealers aren't in it for their health, after all.) 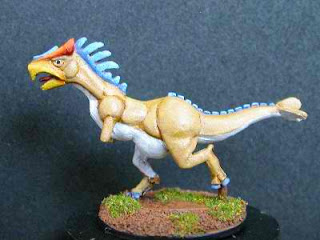 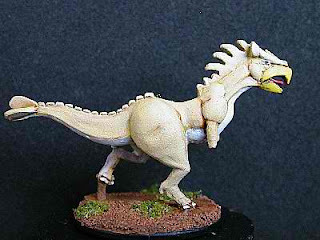 Here are two views of Rod's gashant, sans rider to show off the details of the beast. One of the limitations of the 25mm line GDW sold way back when was the shortage of cavalry. The gashant was so massive, and used so much lead, it was never economical to do a set of cavalry -- or rather we would have had to charge too much to make the product attractive to consumers. 15s use so much less metal that the unit costs have as much to do with packaging, labor, mold-making costs, etc. Making a slightly larger piece like this isn't free, but it's less likely to break the bank in this scale than it was in 25mm, so expect to see various units of cavalry in the line.

A good start, although now I am becoming more impatient for the line to be ready.
Posted by Frank Chadwick at 3:34 PM