For miniatures players, the lack of suitable Steampunk vehicles has long been a concern. Right now, there are undoubtedly more of these available than ever before. But the nature of Steampunk is that vehicles tend to be -- well, wacky, and each of us has a unique vision of how that wackiness expresses itself. The result is that commercially available vehicles, while quite nice, often do not represent the vision we have.

When that happens, and it inevitably will, it's time to get creative by modifying existing vehicles, repurposing commercial vehicles, or building your own -- either from scratch or by assembling parts of existing models in ways not intended by the original designers. Here are three photos sent in by my old friend Tom Harris of the Central Illinois Tabletop Warriors (CITW). 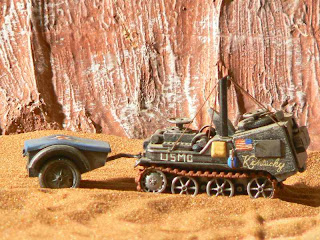 This is a steam-powered armored cargo tractor, crossing the Martian sands in service to the United States Marine Corps. It was assembled by Steve Lawrence and is made from parts of other vehicles, along with a fair amount of scratch building on the body. Here's something important to note about scratch-building and conversions: your original work does not have to be perfect. If it is symmetrical and reasonably clean, imperfections can be disguised by adding little detailing bits. In any case, large pre-manufactured components (like the tread section and the cargo trailer) add to the illusion that this is an entirely manufactured vehicle, as do the detailed additional features, like the doors with locking wheels. 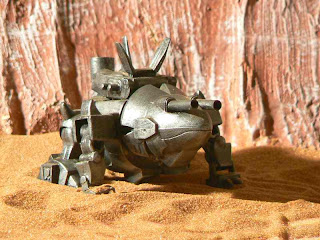 This is a very unusual, but arresting, walker done many years ago, also by Steve Lawrence, and fondly known in as "The Fire Toad." I am certain it started life as something else, but I don't exactly know what. Perhaps someone out there recognizes the original model. To me, this just shouts Mad Scientist. 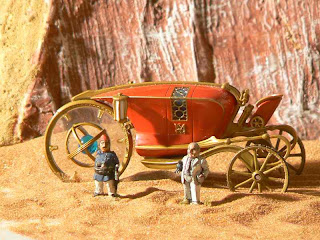 Finally, here is a good example of re-purposing a vehicle from another source. This is a movie toy from the film Golden Compass, but has been pressed into service as the steam-carriage transport for the League of Pear-Shaped Gentlemen (an organization to which increasing numbers of us seem eligible for membership).
Posted by Frank Chadwick at 12:03 PM