I think I did. I promised I would revisit the subject and give you my ideas on how a Victorian era walker is somewhat more plausible. First, however, John Bear Ross pointed out that I'd neglected his Martian walkers for Rebel Minis. My appologies for the oversight, John. They are indeed fine models. 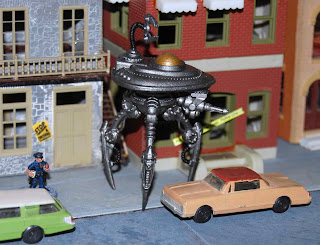 .
Here's a small one armed with heat ray and autocannon. 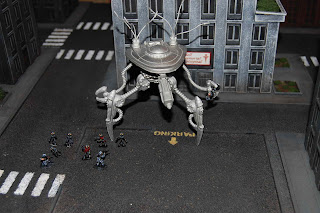 Here's a big honker, much more imposing in my opinion. (Love the hair.)

Now, as I mentioned before, I have what strikes me as a fairly simple solution to the tripod walker imbroglio. I like my idea, but to be honest, I like almost all my ideas, so you'll have to be the judges. The basic notion is that all three legs do not need to be equal. A single central leg mounted dead center in the bottom, which simply swings forward and back and goes in and out -- essentially a great big steam-powered piston with a rotating "foot" on the end -- provides all of the motive force and most of the support for the vehicle. The other two legs are mounted to either side and provide balance, not motive power.

Here are some side-view diagrams to show how it works. Obviously this is an early prototype, as it features an exposed driving compartment and is piloted by the inventor's portly assistant. 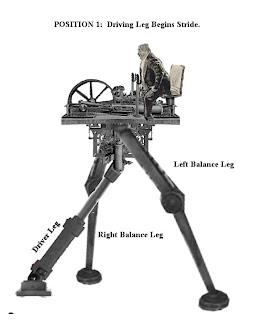 These may be a bit hard to read. The first diagram (Position 1) shows the walker beginning a standard stride. The Driver Leg (the central motive piston) is all the way forward and fully extended. The two balance legs are planted. 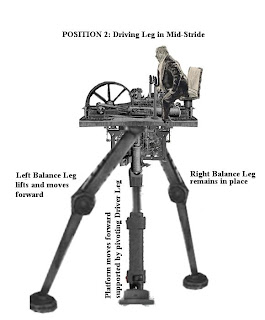 The second diagram (Position 2) shows the walker in mid-stride. The walker has been moved forward by the rotating driver leg, which is now also partially retracted (to keep the chassis of the walker at a constant height). The right balance leg is also still in its original position while the left balance leg has lifted and moved forward. 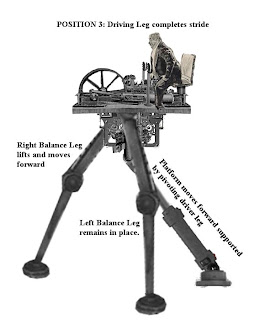 In the third diagram (Position 3) the walker has moved further forward on the pivoting driver leg, which is again fully extended, now to the rear. The left balance leg remains planted but the right leg now moves forward. 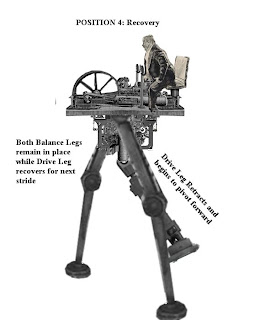 In the fourth diagram (Position 4) the walker briefly balances on the two balance legs as the driver leg piston retracts and then swings forward. When it passes the centerline, the center of gravity moves forward and begins to tip the walker as the piston extends, which will put it back in Position 1 to start a new stride.

Posted by Frank Chadwick at 2:08 AM