Here are two more wilderness adventurers in 15mm from Rod at Highlander. I like these a lot because they are based, directly or indirectly, on historical characters. 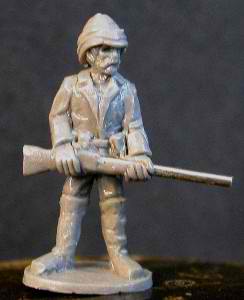 This first figure is an explorer, and a fine confident fellow he is. The figure is based on the American Henry Morton Stanley, sometime journalist, explorer, soldier of fortune, and eventually empire-builder in the employ of King Leopold of Belgium. He made his name finding the missionary/explorer Dr. David Livingstone, supposedly greeting him with the now-famous words, "Dr. Livingstone, I presume?" Stanley also made his name "rescuing" Emin Pasha near the headwaters of the Nile , although Emin Pasha did not think he particularly needed rescuing, and later complained that Stanley's arrival destabilized a situation Emin already had well in hand. Certainly Stanley's lasting accomplishment, if you care to call it that, was the brutal conquest of what became the Belgian Congo, a place which arguably has not recovered to this day. 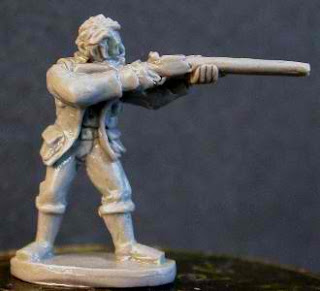 Rod says this next figure, a hunter, is loosely based on Alan Quatermain, who of course is a fictional character from the pen of H. Rider Haggard. What Rod probably didn't know is that the fictional character Quatermain was based on a real-life adventurer, an Irishman named Charles Stokes, who went down in history as Bwana Stokesi. Explorer, hunter, ivory trader, and scoundrel, he certainly inspired the darker side of Quatermain's character, along with his physical courage, thirst for adventure, and at least some of his roguish charm.

There's an interesting historical intersection between these two figures: Stokes was hanged in 1895 in the Congo by a Belgian colonial official for illegal trading, so indirectly his demise was a product of Stanley's handiwork.