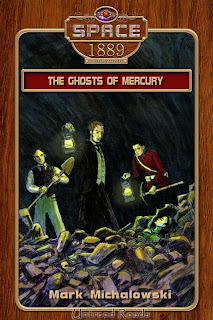 We hoped to release Ghosts of Mercury by Mark Michalowski today but a technical gremlin decided otherwise. That's what comes of trying to release something on Haloween, I suppose. It should be out in a couple days, however. In the meant time, the cover art is shown above and here is a video trailer for your enjoyment.

Also, here is an exclusive exerpt from the book. Enjoy.

He was there. Again. Standing silently in the corner of the room. There but not quite there.

When Corporal Heath looked directly at him, he seemed to jump, as if instantly whisked to some other part of the room that was now at the edge of his vision. Heath couldn’t help but still try to catch it out, hoping that, just once, the ghost might forget to jump.

Heath ached—not only with the pain in his leg and ankle and chest, but with frustration. He had lost count of the number of times the ghost had vanished completely, and he’d found himself staring down at his white hands, balled up into fists, clutching the hospital sheets. He sensed something not altogether right, not happy about the ghost. There was a darkness there that he didn’t like at all. Realising how tense he was, Heath consciously relaxed and let his chin drop to his chest, triggering a jolt of pain from the torn muscles around his collarbone—before looking up suddenly, another bolt of pain shooting down his left arm from his shoulder. There was something going on in the corridor; he recognised Doctor Schell’s voice. The door to the ward was flung open and in swept the doctor, in his wake a slim, striking woman with black hair and the most hypnotic eyes Heath had seen for a long time. She had a healthy tan which immediately marked her out as a newcomer to Mercury. In her arms, she carried a large, buff folder, holding it close like it was the most important thing in the world. Behind them, hands flapping and a look of intense annoyance on her face was Nurse Lopez. She shot a glance at Heath as if to apologise for letting Schell and this new woman in.

“Heath!” beamed Schell coming to a sudden stop at the side of the bed and folding his arms. “How the devil are you, man?”

“Can’t complain sir,” Heath replied, knowing that an angel must surely have been looking out for him all those weeks ago.

“Good man,” Schell said. “Good man. Been through the wars, haven’t you? Good to see you on the mend, though. Bearing up, hmm?”

Schell turned to Nurse Lopez who stood there, glowering at him. By all accounts, Nurse Lopez’ parents—and in particular her mother—were possessed of fiery Latin temperaments that their daughter had clearly inherited.

“This man is sick, Doctor Schell. I do not think you really need me to tell you that, do you? You are a doctor after all. He needs rest and time to recover, not being interrupted during dinner.” Her English was impeccable with barely a hint of a Spanish accent. Doctor Schell looked up and down the bed and at the side-table. There was no sign of any meal, either fresh or half-eaten.

“You don’t have to apologise for not being hungry, you know,” interjected the dark-haired young woman who sounded, from her accent, like an American. She smiled at him and gave him a wink.

“Well that just won’t do,” said Schell with a firm shake of his head. “You need to get something inside your belly. No man ever got better from not eating, now did he? And many have gotten much, much worse.”

Schell raised an eyebrow and glanced back at Nurse Lopez. “Well make sure you do—and if he doesn’t, Lopez, I’ll be wanting to know why.”

“Corporal Heath is doing very well, doctor. He’ll eat when he wants to.”

The doctor nodded as if he’d just won that round and turned to the woman he’d arrived with. “Corporal Heath, this is Miss Annabelle Somerset. She arrived on Mercury today. She’s a close family friend of the colonel, so make sure you show her some respect. She’s here…” He paused and looked at Nurse Lopez. “That’ll be all, thank you, Lopez. I’ll shout for you if I need you.”

Nurse Lopez pulled a sour face, looked Miss Somerset up and down as if appraising her as a potential rival—as women, in Heath’s opinion, were wont to do—and then turned on her heel and left, letting the door bang behind her as a final gesture.

“Sorry about that,” Schell apologised to Miss Somerset. “She gets very protective about poor Heath here. Good thing, I suppose, considering she’s a nurse. But still… Anyway, the colonel says that Miss Somerset here would like to talk to you, if you feel up to it.”

“About your accident,” said Miss Somerset. “And…and what’s been happening to you since then.”

The Ghosts of Mercury by Mark Michalowski, soon to be available from Untreed Reads Publishing.
Posted by Frank Chadwick at 10:46 PM