Last weekend I ran a Mars Needs Steam! game up in the Chicago area and my pal Tom Harris shot some pictures. The game featured the British and German allies against the Russians (with Fenian allies) and Oenotrian Imperial Canal Martians, with a mixed Franco-Turkish force remaining scrupulously neutral throughout. This game also featured the debut of my kit-bashed small British flyer, which I've dubbed an "aerothopter." 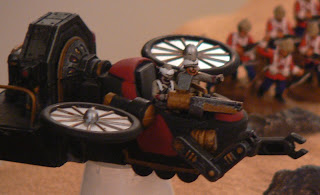 Here's a pretty good view of the aerothopter, showing its open cockpit and crew of two as well as its armanent of a 3-pounder Hotchkiss revolving cannon. It is held aloft by two ducted fans rather than liftwood. 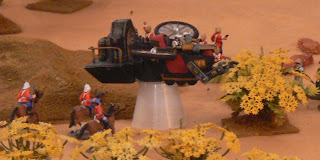 Here's a longer view of the aerothopter as flies over some British mounted infantry and scattered woods. The forward part is from a 1950s-era science fiction playset, and includes the cockpit section, ducted fans and grasping arms. The rear superstruction was my own addition, the power plant being part of a terrain piece (half of the power transformer) from Itar's Workshop, which has some very nice steampunky bits. Here's a link to their webpage. The Hotchkiss revolver is scratchbuilt, but there are commercial versions available as well. (I was just in a hurry to get it done.) 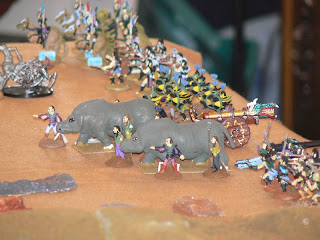 The Oenotrian Imperial legions advance, their artillery drawn by massive ruumet breehrs. The figures are all RAFM, Canal Martians for the foot and gashaant-mounted cavalry and elves for the gun crews. The ruumet breehrs are conversion from toy rhinos. 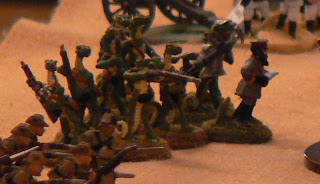 This picture is a little blurry, but it shows a squad of German Venusian lizardman Schutztruppen, with bearded German NCO in the lead. Some German colonial troops are just visible in the foreground. I know, Venusian Schutztruppen were not actually employed on Mars, so this was not strickly speaking an historical game. The lizard Schutztruppen are conversions from RAFM's old line of fantasy lizard  men. 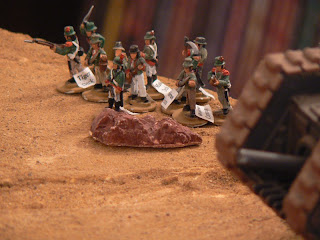 A squad of Fenian infantry advancing in support of the Russian steam tank. They have a shifty look about them and are clearly plotting some outrage against The Crown.

The Russian personalities and leaders, from left to right, the colonel commanding the military forces, his aide de camp, the highly esteemed (and decorated) geologist, and the lady naturalist -- quite unusual in a Russian party but not unheard of. 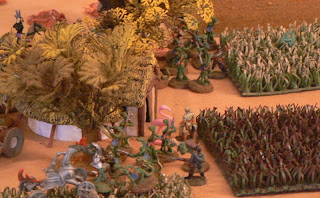 Another view of the German lizardman Schutztruppen as they secure a Martian village and are attacked by a clockwork infernal device (lower left) unleashed by a renegade human inventor in league with the Oenotrians. The German archaeologist (center) has paused to examine the decorative lawn statue which graces the entryway of the native hut. 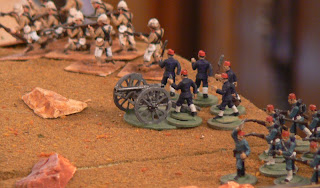 Turkish infantry and artillery prepare to advance, supported by a squad of the elite French Garde Rouge (upper left).

Great fun and another successful playtest of the rules.
Posted by Frank Chadwick at 2:46 PM