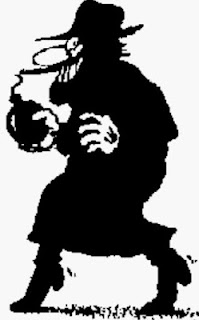 It has been a while since I've done a craft-of-writing piece and since I'm struggling with the rewrite of The Forever Engine it seemed an appropriate time to share my thoughts on an issue which confronts (or ought to) all novelists -- their villain. There will be no spoilers in this piece, so no need to worry about that, but that also means it will address the broader issue of villains rather than the specific villain in The Forever Engine -- although the challenges are the same.

For starters, let me say that as a reader I have no patience with cardboard cutout villains, who are evil for evil's sake and whose principal motivation (that I can see) is to give the protagonist an excuse to whup up on the villain's legions of loyal minions. Why they are so loyal to this psycho is often a mystery worth considering, but that's usually the smallest problem I have with that sort of story.

For me, stories really work well when the villain is as  interesting as the protagonist -- maybe even more so. Think of how many really great stories were made great by the stature of their villains: Hannibal Lector in The Silence of the Lambs, Captain Ahab in Moby Dick, Iago in Othello, Dracula in Dracula, and for that matter Media in Media. So I see a four-fold challenge facing authors when it comes to their villains.


Challenge One: What do They Want?
Protagonists have over-arching goals. Villains do as well. What is their life goal? What end-state do they seek? Most importantly, why do they seek it? For their goal and motivation to be engaging it seems to me they have to see themselves as the heroes, the good guys. From their point of view, this is their story. I think the film Open Range is one of the five or ten best westerns of all time, and part of that is due to the villain (Denton Baxter) played by Michael Gambon. In a different story, perhaps one set a decade or two earlier and dealing with "taming the savage west," he'd be the hero. The fact that he's lived past his usefulness and has been unable or unwilling to adapt to changing times makes him definitely a bad guy, but one with some tragic aspects as well. How different is he from the protagonists of The Wild Bunch, or even Butch Cassidy and the Sundance Kid?


Challenge Two: What Do They Have To Do To Get What They Want?
This is a bit more mechanical than the above but still involves some artistry, as well as the need to tie the villain's actions into the genre. Ideally the villain's necessary actions should  be the window to the genre. In Open Range the villain's goals -- protect what's his -- manifest themselves in the struggle between fenced in pasturage and free-range cattle drives, and so show us an issue at the center of a turning point in the history of the west. In a science fiction story the villain's methods should be at the heart of the scientific curiosity of the story.


Challenge Three: Why Are The Villain's Actions So Potentially Catastrophic The Hero Must Stop Them At All Costs?
This is a tough one, but it becomes the heart of the story. It is the essence of the story's conflict and ultimately separates the hero from the villain. Since it's the heart of the novel, how big the conflict is determines the scope of the novel itself. If what's at stake is the hero's life, okay. We understand a person wants to survive in the face of a deadly threat, but that doesn't make them a hero, does it? That's not that big a story. Does the villain threaten other folks we care about? Bigger story. Does the villain threaten a way of life? Bigger story still. Is justice on the line? Is truth on the line? Will something of value to mankind be lost forever? These are bigger issues, and make the story itself bigger.


Challenge Four: It All Has To Make Sense
This one, ironically, is the toughest of them all. A villain who has a giant organization working with him and whose goal is to destroy the world makes no sense. He's actually in the world. What does he get out of this deal? And yet you see this over and over. A human who betrays his race to alien exterminating conquerors "for power" makes no sense. Power over what? Power over whom? But you see this as well.


More subtly, the way the villain goes about achieving his goal has to be the most logical and sensible approach (at least for him). If he's going to set off an atomic bomb in New York City when he could as easily achieve his goal by robbing a convenient store, that's a problem.


There's a pretty good Denzel Washington film about a runaway train, called "Unstoppable." The villain is a senior executive at the railroad who will not listen to the voices of reason and experience and mishandles the attempts to solve the runaway train problem. But he isn't stupid; he's an experienced railroad man who's simply so used to being the smartest guy in the room he can't credit anyone's ideas but his own. So far so good.


So at one point he gets another engine in front of the runaway train to slow the train to the point that a replacement engineer can be lowered onto it from a helicopter. The train can't be slowed quite enough, the replacement engineer on the cable gets smashed through a window and seriously injured, and other bad things happen. It's a very dramatic and exciting sequence, but ruined (for me) by one nagging question: why not put the replacement engineer in the engine in front of the runaway train, so when they matched speeds and effectively coupled to it, he could just step from one engine walkway to the other? Remember, the villain isn't stupid, but in this case he is required to act as if he is simply so the story can go on. Not very satisfactory writing, in my opinion.


There are few things more annoying to me than a plot propelled forward primarily by the stupidity of the villain, unless (as in the film Fargo) that's kind of the point of the story. So the hardest part of all this, in my opinion, is making all these moving parts fit together as if this is the only way in the world they possibly could. If you can pull that off, that is good writing.
Posted by Frank Chadwick at 3:31 PM